MST Gives Back in Memory of Pearl, an AHS Senior Rescue 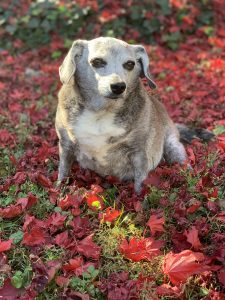 Back in March of 2020, during the early stages of the pandemic, my husband
and I adopted a portly little dog named Pearl from the Asheville Humane Society. We
named her Pearl because she was grey and white in color, fairly rough around the
edges, and so delightfully round. Pearl was a senior dog, and unfortunately came to
us with a number of health issues and only four awkwardly spaced teeth that she
would gladly display for you should you remain in her personal space for too long.
To be clear, Asheville Humane Society was very forthright about Pearl’s less
glamorous attributes before we adopted her, and Pearl proudly exhibited her ornery
disposition the moment we were all introduced. So despite a first meeting that could
charitably be described as disastrous, we decided to adopt Pearl and hope for the
best. In hindsight, it was one of best decisions we’ve ever made.

Oddly enough, Pearl acclimated to her new home very quickly. She
apparently did not reach her ripe old age by luck alone as shown by her frequent
and surprising displays of intelligence. As the days passed, Pearl learned the
routines of the house from our other animals, and even began whining until my
husband would pick her up and put her in our bed at night. For each little milestone
in our evolving relationship, we took joy in the knowledge that Pearl was beginning
to feel a sense of security, and maybe even an actual affinity for her new family.

Things were going well, and it wasn’t long before Pearl began showing us her
more lovable traits on a regular basis. She loved going on short walks and long
stroller rides. She enjoyed sunbathing in the back yard whenever weather
permitted. She was also the most photogenic dog we’ve ever owned! Pearl eased
into her new schedule, and stuck to it on most days. In the morning, she was at her
sweetest, and we began calling her “Early Pearly” to indicate when she was feeling
particularly approachable. In contrast, “Surly Pearly” or “Pergula”, would also emerge every now
and then, and we knew it was best during these times to leave her alone. For the
most part, however, Pearl really enjoyed her new life and her new family loved
having her as well.

My husband and I have had many senior dogs over the years, and we know
about the inevitable heartache that comes when we have to say goodbye to them.
We’ve never really been “ready” to say goodbye, however, despite that knowledge,
and especially so when our relationship with a dog is just beginning to blossom.
Unfortunately, we had to say goodbye to our sweet Pearl after a prolonged but
unsuccessful hospital stay about 9 months after adopting her. Our time with Pearl
seems so fleeting to me now. We had the opportunity to smile and snuggle together
for a short time, and then one day she was gone.

We were heartbroken in those days and weeks after losing Pearl, but I always
took solace in the fact that Pearl had a better life being with a family that loved and
cared for her than she would have had otherwise. Although we suffered and cried
after her loss, our sweet Pearl got to live out her last days in relative comfort and
peace, and that’s what made it all worthwhile for us. If you adopt a senior dog, there
will inevitably come a day where you have to say goodbye, but otherwise the
relationship has reciprocal benefits: you provide the snuggles for them, and they
will provide you with smiles that you’ll keep forever. Mountain Star Team is a
proud supporter of the Asheville Humane Society because of wonderful animals like Pearl, and would urge anyone capable to consider adopting, fostering or otherwise supporting their cause.

Update: after taking some time to grieve the loss of our dear Pearl, we found another senior dog who needed a home at Asheville Humane Society. His name is Gordon. He is deaf, and he is wonderful. 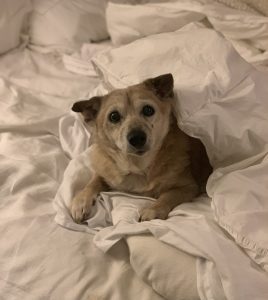